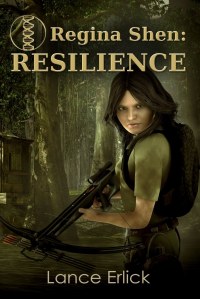 A dystopia that isn’t the result of some huge cataclysm or alien invasion… That alone would be enough to make this novel stand out from the crowd. Also, unlike the other novels by this author I’d read, this one is in past tense, which I prefer. (Present tense feels artificial to me. It’s just a matter of personal taste.)

After reading The Rebel Within, I said I wanted to know a lot more about the setting and backstory, not because the author failed to give enough information for that story but because was so interesting.

The Regina Shen novels take place in the same setting (?) as the Rebel stories, but two or three centuries later. Although it is not as prevalent, the author continues to explore the idea that, if a segment of the population is labeled “the oppressors” and removed, that doesn’t stop oppression, only who is doing it. The fact that Mr. Erlick manages to do that without ever getting preachy is impressive (and much appreciated by this reader).

Some of the themes of those other novels are in this one, too: the protagonist has a younger sister whom she tries to protect, she has a difficult relationship with her mother (and her mother keeps secrets from her)…

This is YA science fiction, but don’t let that give you the wrong impression. This is not a “It’s the end of the world, but at least the cutest kid at school thinks I’m cute” sort of story. Regina Shen and her family (and neighbors and friends) face a very realistic struggle to survive in a harsh environment and against dangerous antagonists, and Regina herself is trying to find out what her mother is hiding and why those government women are after her, and the plot is gritty without being “grimdark.”

If I had to come up with one thing from this first novel to complain about, it would be this: These characters know a lot about surviving in swamp country, so why don’t they know that cattails are edible? (That’s a very minor quibble, isn’t it? Certainly nothing that should interfere with anyone’s enjoyment of the story.)