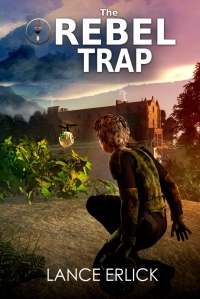 I once saw a film where women had taken over the world and men were used as fodder, for many things. This book makes that film look ridiculous. It takes dystopian, women-based worlds to a new level.

After the first book ended with one of our major characters winning in the arena, but shunning the thought of killing a man, Morgan, we find ourselves thrust into book two, with so much excitement and emotion sweltering to the surface.

We watch as a selection of females show us what the ‘peace’ in this female-driven world is really like. Secret upon secret, slathered in a sauce of secrets seems to be what these girls eat. Everywhere we turn, people are watched, monitored and keep in order. Everyone has their own agenda, which has often been set in place by someone above them benefiting from the success or failure of their agenda. Even thoughts are sacred, as we see Morgan (and a few others) hack into the minds of our readers.

With nothing private and everything at stake, we follow along as this supposedly peaceful, oestrogen driven world starts to crumble. From love to hate, and every emotion in between, we find ourselves choosing sides, as readers, and often wondering if we are following the right side.

I found myself drawn to the pages, often fighting for the side I thought best, chapter after chapter. I loved every minute of this read. IT was written very well, provided a great deal of action (though not all the action was physical, as most of the characters were battling mental and emotional wars as well). I was left hanging after each page, itching for more and this was only compounded as I turned the final page. I have been left wondering, desperate to read Rebels Divided and find out how the story pans out.

I highly recommend this read if you are into Dystopian reads that give you more than just a physical war, but play on your emotions and toy with your thoughts.